EDISON FORMAT RULE # 4 - Trap Monsters
In Edison Format, Trap Monsters occupy BOTH a Trap Card Zone AND a Monster Card Zone. Trap Monsters rulings remain the same.
EDISON FORMAT RULE # 5 - Ignition Effect Priority
In Edison Format, "Priority" (a player's "right to activate a card or effect" that starts a chain) also allows the turn player to activate an Ignition Effect in response to a Summon that did not start a chain. Cards themselves do not have "Priority". Additionally, "Priority" exists regardless of whether or not a player "calls Priority". The current explanation for what Konami calls "fast effect timing" and "open and closed gamestates" can be found HERE. This same mechanic is what people call "Priority". With this in mind, everything on Konami's flowchart applies in Edison Format. For a comprehensive breakdown of "Priority", read our breakdown HERE.

In Edison Format, "priority" permits the turn player to start a chain with a monster's ignition effect when the last thing to happen was the successful Summon of a monster (during the Main Phase) which did not start a chain.
EDISON FORMAT RULE # 6 - Simultaneous Effects Go On Chain
In Edison Format, the rules established in the tradition called “Simultaneous Effects Go On Chain” (SEGOC) apply with one minor exception: if two or more effects in the same “step” were triggered at different times, the earlier trigger(s) must be placed on the chain before the later ones [REF]. This realistically only applies to Mandatory Effects ("Step 1" & "Step 2"), as many optional Trigger frequently miss the timing. This rule concerning SEGOC would be changed in 2017 [REF]. In Edison Format, when multiple Trigger/Trigger-like Effects are triggered simultaneously, the players construct a chain with these effects in accordance with the following rules: Let's demonstrate what makes Edison Format different from contemporary Yugioh (pay attention to Example 1)!
EDISON FORMAT RULE # 7 - The 7-timing Damage Step
In Edison Format, there are seven distinct timings (unofficially called "Substeps") which sequester events within the Damage Step. Read the complete breakdown HERE, and use the flowchart (below) we built to help battles flow smoothly! 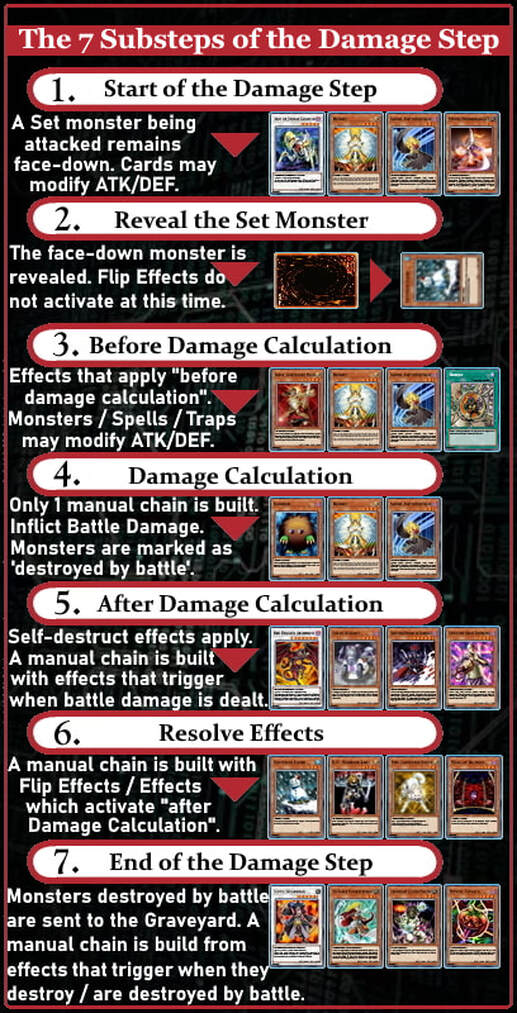 EDISON FORMAT RULE # 8 - Trigger Location & Recognition
In Edison Format, triggers can be recognized as being met in the middle of a chain, whereas in current format Yu-Gi-Oh! this is generally not the case. Trigger Effects will also activate outside from outside their trigger location (unless they specify that they must remain there to trigger), even activating from within the Deck! Read more HERE.
EDISON FORMAT RULE # 9 - Life Points Costs
In Edison Format, you cannot pay costs if doing so would reduce your Life Points to 0. A card with a maintenance cost of Life Points cannot reduce a player's Life Points to 0, it will instead self-destruct.
EDISON FORMAT RULE # 10 - End-of-Turn Discard
In Edison Format, players can't respond to the end-of-turn discard for hand size at all, as this must be the last action a player performs in a turn [REF1, REF2]. However, when a mandatory Trigger Effect is triggered by this discard, a chain will be built with special properties: This differs from the rules surrounding the end-of-turn discard in contemporary Yu-Gi-Oh!. These differences are best illustrated as follows:
EDISON FORMAT RULE # 11 - Infinite Loops
In contemporary Yu-Gi-Oh!, when an infinite loop is created, a nuanced procedure is performed wherein players and judges determine which card is the "primary cause" of the loop; that card is then sent to the Graveyard by game mechanics. In Edison Format, this is only true for "involuntary" infinite loops (see  Example 4 ), when an infinite loop is initiated by game mechanics and not by the action of a player. Conversely, in Edison Format, any "voluntary" action that would cause an infinite loop is simply illegal (as depicted in Examples 1, 2, and 3).
EDISON FORMAT RULE # 12 - 0 ATK Monsters
In Edison Format, when two Attack Position monsters with 0 ATK battle each other, they will destroy one another by battle. This interaction was overturned in 2011 with Version 7.2. (p.43) of the Rulebook [REF]. Additionally, an Attack Position monster with 0 ATK cannot destroy a Defense Position monster with 0 DEF by battle.