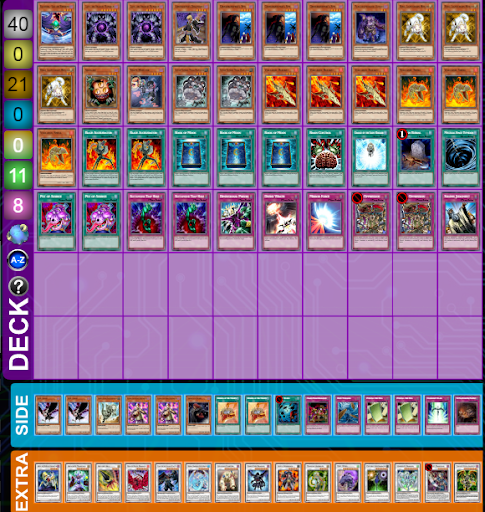 Volcanics is a control deck, your goal is to grind your opponent out by trading favorably with their resources thanks to the power of Volcanic Rocket, Volcanic Shell and Blaze Accelerator, alongside the Gravekeeper's, Ryko, Lightsworn Hunter and Caius the Shadow Monarch before reloading with Pot of Avarice.

The deck has consistent turn one plays thanks to its Flip effects and can efficiently tackle an opponent’s set monster opening thanks to Volcanic Rocket and Blaze Accelerator, which can get rid of opposing Ryko, Lightsworn Hunters without losing card advantage and allow you to develop your set monster without fear.
The midgame often consists of making favorable Blaze Accelerator trades while you develop your Flip monsters into Caius the Shadow Monarch or Synchro Summons. ​

The monster lineup consists mainly of FLIP effects, as those synergize the best with Blaze Accelerator, which prevents you from attacking.
The presence of nine Flip monsters, three Rockets, a Sangan and a Charge of the Light Brigade aims at making sure you open with a play and that you can transition smoothly into your midgame. Making a play each turn is key, as you get ahead faster the more Flips you can resolve. To protect your Flips, you can use Blaze Accelerator to destroy your opponent’s set monsters and prevent their Rykos from ruining yours, while denying tribute fodder for their Caius. Remember that Blaze Accelerator does NOT discard for cost. Foolish Burial acts as an extra copy of Shell but you can also send Plaguespreader Zombie and make a play with it. The effect of Plaguespreader Zombie is powerful in a deck with Volcanic Shell, as you’ll be able to add back the Shell you put on top of your deck immediately, essentially making Plague free.
Alternatively, you can put back Blaze Accelerator and search it again by summoning Rocket. Don’t worry about milling it, Rocket can add it from the graveyard too!
Snipe Hunter is a great card in any deck with Volcanic Shell, as the effect isn’t once per turn. Snipe is often a problem solver, as it can get rid of something that Blaze Accelerator can’t touch, like Stardust Dragon or a Spell or Trap (or more than one!).
Sometimes you might be holding dead Rockets as you have a Blaze on the field and the other in your hand. You can use Snipe to ditch the Blaze and add it back later, so I advise you not to set the second copy.
Royal Oppression rounds out the deck, as all of your monsters can just stay set until your opponent attacks them, at which point they’ll Special Summon during the damage step and Oppression won’t be able to negate them. Rocket and Caius are your best cards if there’s Oppression, although your Flips won’t ever be truly dead if your opponent cannot attack you because of them.​

The Side Deck is up to you, but I can recommend the one you see in the decklist. Let’s go through each card:

In the Extra Deck, we can find all the best generic Synchros available in the format, as well as some more niche ones that we have access to. Most of them need no introduction so I’ll just talk about the non-generic ones.
​